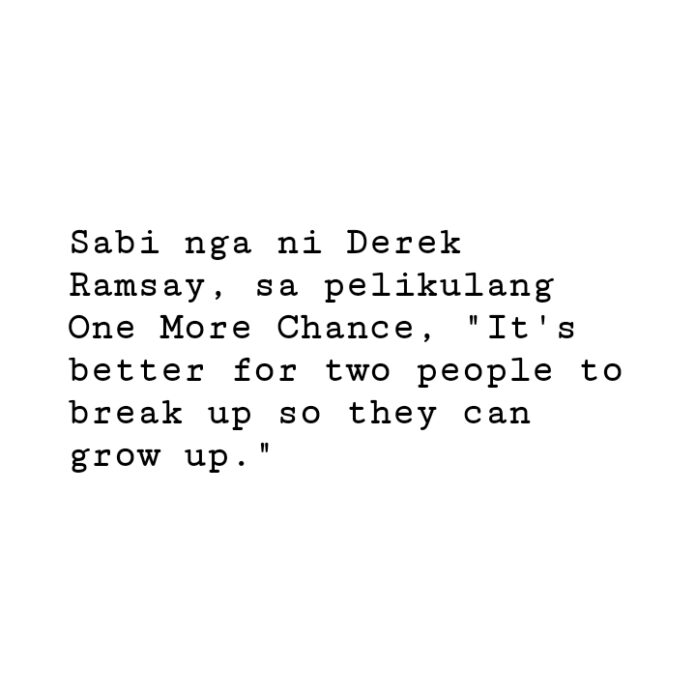 As to where it originated and to whoever invented the idea(s), I don’t have any knowledge about that. But if you’re curious about what it means or implies, I may have a few say on the topic.

So what exactly is the three-month rule anyway?

As far as I know there are 2 types: After a Break-Up, and During Dating.

Three-Month Rule: After a Break-Up
This one was introduced and oriented to me by my friends.

Basically, after a break-up, the three-month rule is a rule that says you and your ex are both given 3 months before entering the dating scene again. Just waiting it out, and mourning that your relationship ended. Just go on with your individual separate lives and see what happens. To some this may be just a short period of time, while it may mean otherwise to others.

In any case, after the third month, if you BOTH find that you’re still in love with your exes, then you might consider trying to work it out again. If only one of you feels something and the other doesn’t, then it may no longer be worth a shot for a second chance. In addition, if you’re certain that you no longer feel anything towards your ex partner, then it’s the accepted time that you’re allowed to date again.

Having this rule is more or less about mutual respect, and about the healing process for both parties. It’s a safe approach in ending a relationship I guess and to avoid that horrible feeling, for example you saw your boyfriend or girlfriend dating already the next day after a 5-year relationship. Because let’s face it, seeing your past love date someone after a few days or weeks from your break-up tears you into a million pieces.

So there. The first type of the Three-Month Rule.

Now, on to the next one.

Three-Month Rule: During Dating
Suppose you are dating someone right now, but you’ve only known the person recently. This three-month rule is to slap you from the mirage you might be experiencing. First impressions honestly, barely last.

In reality, when you are attracted to someone whether physically, emotionally or whatsoever, your mind is being deceived that everything that the person does is cute, and you actually see them as the person you want them to be.

So the three months is just an ample amount of time for you to see the person and yourself impartially. Is he/she is really that nice? What less desirable traits does he/she have? Do I really like this person? Are we compatible? Is sex all he/she’s after? Would I want this person to be a part of my life for months and years to come? Of course getting to know the person longer is ideal, but three months is just the right time to get you pass the honeymoon stage.

When after all is said and done after those three months, it’s up to you on whether or not you want to continue entertaining the person or put a period on it early on.

What Is It About Romantic Love?

To the ones who still believe in pure intentions