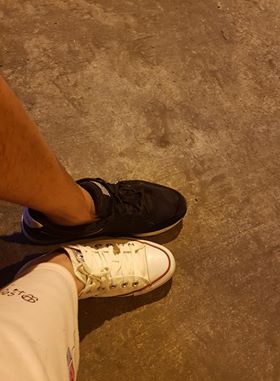 I can still remember how the kiss happened. It was so fast that I wasn’t even given the chance to react. And then just like that, you left, I moved on…or so I thought.

A lot has happened after that, I attended college, went to work, got married, got separated and then luckily found my match, again.

You never crossed my mind, but when topics like 1st kiss and 1st dances would come up, mixed reactions from your memory would put a faint smile on my face. You were my untold story.

And then it happened, by some stroke of fate, we reconnected. It was just an innocent gesture of how you are.  When I felt things were becoming a little strange, I decided to back off, knowing that it would be a sin to keep the lines open.

But somehow, I felt drawn to you. So, I chatted, and then from there all guards came loose. It started as a casual friendly conversation, between old acquaintances wanting to catch up with what’s happening with each other’s lives. Funny, because we are not even friends back then, and yet I all so suddenly I find myself opening to you. Your voice felt like home.

I started looking forward to your messages, you were a breath of fresh air.  I have always adored how your simplicity and take on things can put logic into my overly wired brain.

When you said you liked me, I really wanted to believe it, but my mind questioned its authenticity. I considered a lot of factors, maybe you are bored? Or it is possible that you are just playing with my emotions. It was easy for me to jump into that conclusion, but somehow you proved me wrong.

You were consistent, you never allowed me to second guess or doubt your moves. You explained everything and told me that if there’s anything that you could give me, it would be your word. I held on to that.

I initially thought that whatever this is would just be a phase. My friends warned me to be careful as I might find myself drawn to you already. I did not heed the warning, and then one day I found myself in love with you.

My mind as always, said no, but my heart assured me that after all, my happiness is all that matters. So, I went ahead.

It wasn’t easy, there were days that I wanted to call it quits. I would always question the silence and take it as a sign of your insincerity. But as always, you would find the words to soothe my longingness, and just like a kid being handed with a candy bar, I would feel ok.

Days became weeks and then months, and before we knew it, you’re coming home. It was a day I longed to happen, I had made a lot of daydreams about it because in my heart of heart, I knew it would just be an imagination. But I was wrong, it did happen, we saw each other and after that long 20 years, I was able to return the kiss back.

I thought it would end there, but I guess this story of us knows no ending, as it would continue for as long as we both wanted it to. I am uncertain of how far long that would be, and I am sure as hell I don’t want to know.

Distance, time and differences and even our present situation, everything was against us. But still we decided to continue. We both know that this would end somewhere, but your words assured me that it will all be worth it.

“I would rather have that ending, than have to live my present without you knowing that I love you.”

I know what I deserve but...

Ghosted: We Were Almost

When Time and Universe Al...

What goes around, comes b...

What if hindi naging tayo...