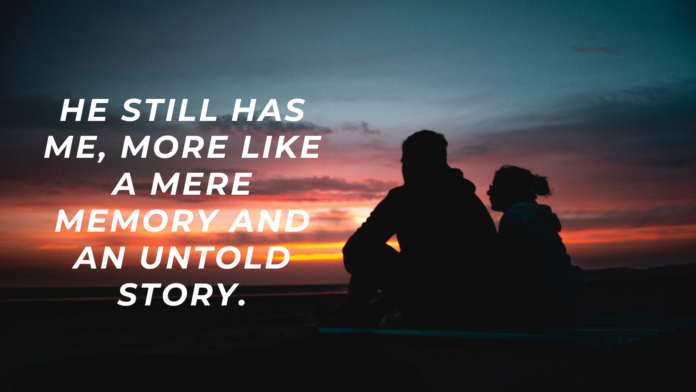 My happiness is when you are happy.

He was the man I cherished for such a couple of years. He has kissed and clenched my universe. Gather all the sunlight during the daytime and accumulated every one of the stars at night, and illuminated my reality. I have let myself believe that he loved me too. Because he told me so-in his eyes, in his songs, in his poetries, and in his smiles. For a very long time, I let him overrun my heart. Yet, our story runs counterclockwise. We broke up, and we get back together. We halted and began once more. We paused yet choose to continue onward. But we have our own examples of endings. ‘Till he never reached out the ending that keeps my heartache I silence, the one that I fear the most.

I tried to move on, tried something new that holds me back before, new places, new people without your shade. Collecting all those shattered pieces within and tried to heal my wounded soul all by myself. Which I thought I could have my universe back again- new and fixed. But I just found myself searching his fragrance, his skin, his laughs and smiles, his eyes and voice in someone’s arms. I realized he never clenched my universe; rather, he was my universe. That every time I saw him, I’d run fast in just a flick of an eye to see his waves of smiles.

But he found his new world, his new home. That I may be the woman beside him while picturing and then building his dreams. I may be the woman who has his favorite movies watched. The first who have heard him sang his own composed songs. And have read all the masterpieces he has written. But he has her now more like a dream. Her is his figment of wedding aisle and wedding dress, morning coffees, hands to hold while traveling the world, arms to find rest and seek comfort forever, ride the same rocking chair and the one who will be with him when their hairs turn gray- his future.

But he still has me being happy because he’s my happiness. He still has me, more like a mere memory and an untold story.

An Open letter to myself

How do you define love?

Do you think we can make it?